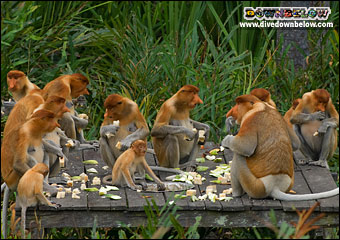 Proboscis Monkeys are strange and unusual creatures found only in the jungles of Borneo and is an endangered species.

Immediately recognizable by their prominent noses, proboscis monkeys are locally known as “Monyet Belanda” or Dutch Monkeys or sometimes just Dutchmen. This is in reference to the European settlers of yesteryear who were said to have similarly large noses and bellies.

The nose has a practical application however, as it amplifies warning sounds and mating calls. When excited the nose swells with blood and turns red, enabling even louder sounds.

The bulbous appendage also commands bragging rights, as the size of the nose is related to a male’s attractiveness to female proboscis monkeys, who have similarly shaped, but significantly smaller noses. 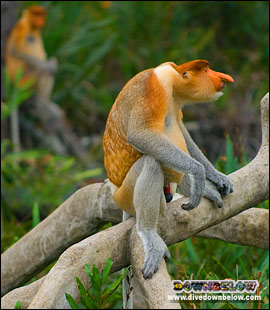 At Labuk Bay Proboscis Sanctuary outside Sandakan, proboscis monkeys thrive in a proboscis utopia of sorts, located in the middle of a mangrove swamp on the banks of a river.

It also provides opportunity for tourists to observe the proboscis from nearby and watch their family dynamics. Regular sightings of infants underlines the success of the sanctuary in helping strengthen the population numbers of this species.

The Labuk Bay Proboscis Sanctuary program is available as a day trip from Kota Kinabalu, or as an addition to one of our other Wildlife Adventure Programs.

Meet at 08:00 upon arrive at Sandakan airport or in the lobby of your Sandakan hotel (including Sepilok Nature Resort). 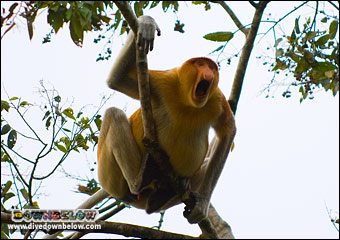 Drive 45 minutes to Labuk Bay Proboscis Monkey Sanctuary through oil palm plantations to where you will get the opportunity to view proboscis monkeys from the observation area at close range.

After the program you will be transfered back to Sandakan airport or you will be dropped off at your hotel in Sandakan.

The return duration of the program is roughly 3 hours.

Back to our list of Borneo Wildlife Adventure Programs >>>