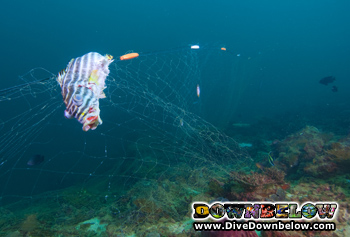 Downbelow today responded to an illegal fishing net stuck on a reef in the TAR Park here just offshore from Kota Kinabalu.

Ever vigilant to factors which could harm the natural environment of the national marine park, Downbelow sprang into action and removed the entire menace from the area.

“At over 80m long, the net was one of the worst we have encountered,” said Richard after the net was cut into pieces and brought to the surface.

“Not only was it smothering the delicate corals like a carpet, but large amounts were sitting up in midwater entangling all kinds of marine life.”

Due to the more active involvement of all concerned in the protection of the TAR Park, life has steadily been returning.

This claim is proven by increased sightings of shark, frogfish, and even the odd Napoleon Wrasse and Blue Ring Octopus. 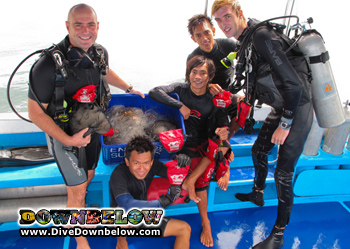 Because of such progress, when the net was reported to Richard, he quickly formulated a plan of action to deal with it and minimize its impact.

The Downbelow team was mobilised and and set about undoing the damage done by coral entangled net.

Not only did the team manage to remove the net, but many of the trapped and entangled creatures were saved, such as crabs, stonefish and various other victims.

Divers who come across nets during their dives in the TAR Park can report them to us, we’ll be happy to help remove it.