Some of the best diving in the world

Sipadan Island is about 20km from the south-east coast of Sabah in Borneo. 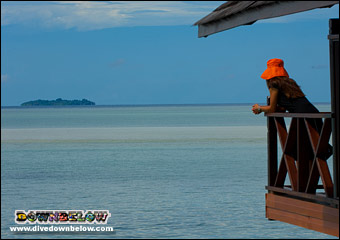 Famous among the diving community, it is described as one of the best dive destinations in the world.

At only 20 hectares in size it is Malaysia’s only oceanic island.

Visitors to the region are no longer permitted to stay overnight on the Island of Sipadan.

Resorts were made to leave before January 2005, however Sipadan is easily reached via a 15 – 20 minute boat ride from Kapala or Mabul Island, where a number of resorts are located.

An important consideration when planning a trip and to get the best out of this area, you’ll want to be as close to the best dive spots as possible.

It’s not out of the ordinary to do 4 and 5 dives a day in the area, but you can’t do this if you have to spend half your day on a boat getting to and from the sites from Semporna. 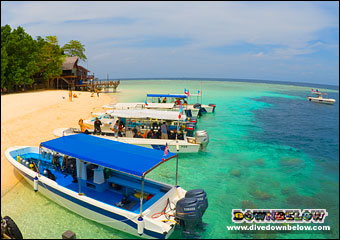 Day permits are now required by divers to dive at Sipadan.

Numbers are restricted to a total of 120 per day, which includes all resorts.

Divers must stay for a minimum of 3 nights at neighboring resort to have a chance of obtaining a permit.

Permits are issued on a first come-first served basis so pre-booking is highly recommend. 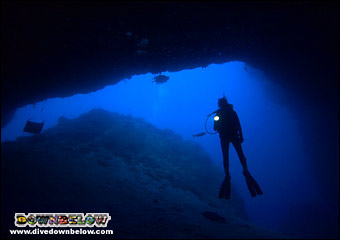 It would be impossible to count the thousands of collective dives the Downbelow team have made at Sipadan over the years, but it has resulted in some amazing photography and knowledge.

Below we briefly describe the notable dive sites.

It’s a shear 600m drop to the ocean floor and starts just a few metres from Sipadan’s sandy beach.

White tip reef sharks lay in small caverns and on ledges below with turtles lazily pass by.

Schools of jacks, myriads of tropical reef fish, bumphead parrot fish and, if dived in the early morning, one may see a single or small groups of hammerhead shark. 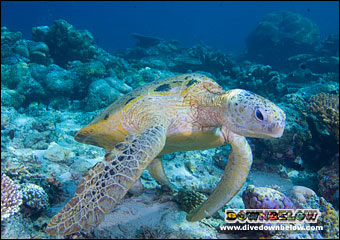 Generally the current is light here and the site is suited to all divers.

The entrace to the Turtle Tomb Cave is slightly east of the jetty.

At 18m it consists of a labyrinth of tunnels and chambers made famous in the 80′s by Jacques Cousteau.

The limestone cave is the final resting place of numerous turtles who ventured inside, became disorientated and drowned.

From inside the cave the entrance is marked by a blue hazy glow, making it appear mysterious and enchanting.

The cave is an advanced dive and a guide is mandatory. 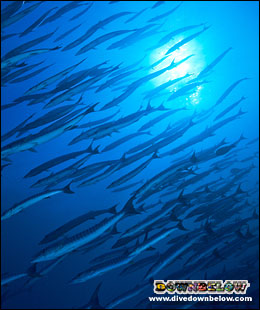 A fantastic corner dive and arguably the best on offer at Sipadan.

Good corals in the shallows slopes to sand and then onto the wall.

One can hope to see schooling fish including barracuda and jacks and tuna.

Currents are temperamental and the less experienced diver should stay with their guide.

Take time here to look for the macro life on offer, such as a variety of nudibranchs.

Mid Reef is made up of the large centre section of the east facing wall of the island. 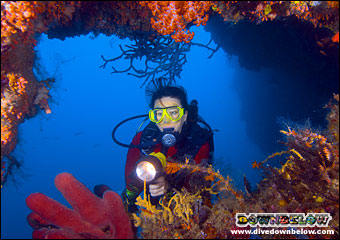 Many turtles, sea fans and barrel sponges can be found on deeper parts of the reef, and frequent checks towards the the blue can reveal many surprises; a resident school of hammerheads, perhaps?

Suitable for any level of diver, and if the current is strong stay close to the reef and enjoy the ride!

With a particularly stunning top reef of healthy soft and table corals, anemone’s and countless colourful reef fish this site is a wild and natural aquarium.

Another site from where to keep and eye on the blue, as anything can pass by. Sightings of mobular ray, and hammerheads are intermittently reported. 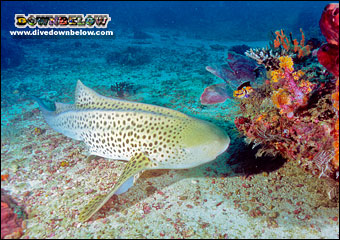 Located at the southern most point of the island, the sloping ledge of the islands reef is a textbook coral ecosystem.

Strong currents are possible, but its generally a novice dive for those staying close to the reef.

An area of rubble and coral heads, Staghorn Crest is home to white tip reef sharks, moray eels, turtles, napoleon wrasse, with the odd mobular ray that passes by.

The crest can be choppy on the surface and some shallow corals have been damaged by strong surge. 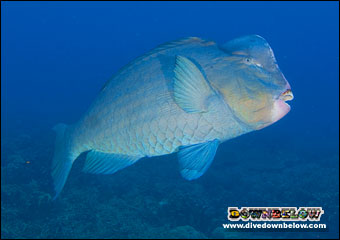 A suitable site for all divers providing the weather is kind.

As the name suggests this site is on the western side of the island with lots of overhangs, sea fans and barrel sponges.

On the northern point and west of the drop off, this wall has many overhangs and inlets sheltering large schools of fish, whilst solitary giant barracuda can be seen on the top reef and close to the drop off.

This site is suitable for all level of divers. 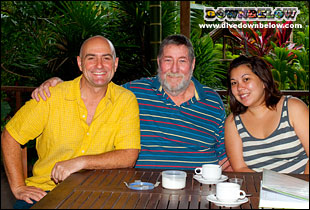 Not been in the water for a while and need a Scuba Review prior to scuba diving at Sipadan?

Then visit us on Gaya Island before your trip and enjoy further discounts at Sipadan -Kapalai Dive Resorts.

Make the most of your Sipadan diving and take advantage of our TWO Centre Diving Destination Offers!!

Back in the day…

Sipadan Island has a fascinating history, first discovered and introduced to the world of scuba diving by British national, Ron Holland, in the early 1980’s.

Ron went on to welcome legendary underwater explorer Jacques Cousteau and led their film crew through Sipadans underwater labyrinth of caves which resulted in the documentary “Tomb of the Sea Turtles”.

To this day Ron lives in Sabah and now, with his wife and daughter, have brought back to life the Kadazan Culture through their living museum, The Monsopiad Cultural Village.