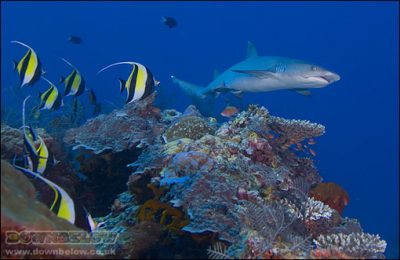 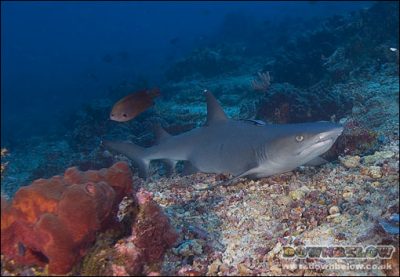 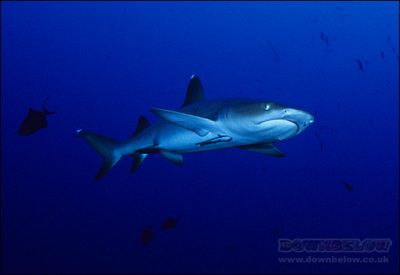 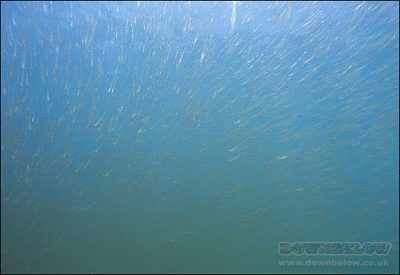 Evidence suggests that Sharks have lived in our seas for around 430 million years, placing them on earth before the dinosaur.

Since this time they have changed very little.

Different species live throughout the worlds oceans, mostly in salt water although the Bull Shark will happily inhabit fresh water, there are approximately 370 named species of shark.

They come in a variety of shapes and sizes but all have the characteristic streamlined body allowing them to cut through the water with ease, most sharks never sleep, instead they have rest and active periods.

Propulsion is from the tail (caudal fin), dorsal and pelvic fins act as stabilizers, pectoral fins lift the shark as it swims, illustrated left.

Located around the head are jelly like pores called Ampullae.

These are electro receptive organs used to detect the presence of any living creature, useful as every living thing produces an electric field.

The colouration of open water species is known as “countershading”.

Unlike bony fish a shark’s skeleton is made from calcium rich cartilage.

This is more flexible than bone, which allows sharks to turn tighter than a fish of the same size, although fish have more moving parts to their skeleton making them more agile.

Their rough skin is covered with little tooth-like scales called denticles and their bodies are held together mainly by muscle and tough skin.

Sharks do not have a swim bladder for buoyancy, because cartilage is lighter than bone, which helps them float.

Also aiding buoyancy is a large liver filled with oil, which is less dense than water.

Many species however must continue to swim otherwise they would sink.

They have five to seven gill slits on each side of their head, bony fish have just one.

In order to breathe, many sharks must swim so that oxygen rich water is pushed through these gills.

Some sharks however, such as White Tip Sharks have spiracles, leading to the respiratory system, which force water across their gills allowing for stationary rest.

The shape of their teeth depend on the food they eat. Most teeth are triangular in shape, some are smooth while others have zigzag edges.

Different shapes are used for seizing prey, cutting or crushing. They are presented in rows, the first being the ones in use with replacements behind, it is very common for teeth to fall out when feeding.

Whale Sharks, the largest of all fish have very small teeth as they are filter feeders, living on small fish, squid, krill and crustaceans.

They eat about 2% of their body weight per day, slightly less than humans, although some can go for a year without eating, surviving on the oil stored in their liver.

Females are generally larger and a lot rounder than males.

Males have two claspers, which are two sex organs, that protrude from the pelvic fins located on the underside.

Why they have two is still unknown, as only one is used to mate!

During copulation the male bites the back of the females head and for this reason females have thick skin in this area, for protection.

Females have an oviduct and to mate they swim parallel to one another.

Sharks mature at a similar rate to humans, but the females pregnancy can, in some species, last more than one year.

Some sharks give birth to live young and some lay eggs.

Although Sharks are some of the oldest and most successful vertebrates on the earth, many now are becoming increasingly threatened.

As demand grows for shark products, more and more are targeted.

Over 150 million sharks are killed each year.

Because their reproduction rates are low, they have long gestation periods and do not mature until about the age of 20 years, the millions that are killed are not being replaced.

Carpet Sharks are generally bottom dwellers (with the exception of the Whale Shark) living in warm tropical seas.

They can all breath whilst stationary, they have two dorsal fins and 5 gill slits.

Whale Sharks can grow up to 18m in length, making it the largest of Sharks and, in fact, the largest fish in the ocean.

Unlike most other sharks, the Whale Shark’s mouth is located to the front of the head, which facilitates the filtering of krill, plankton and small fish and squid, which it feeds on.

Primarily pelagic, seasonal sightings of Whale Sharks are common around certain reefs. They are mainly solitary creatures, but are sometimes observed in small groups.

They give birth to live young, which are around 2ft long, but do not reach sexual maturity until the age of about 30 years old.

Some research suggests that if man were to leave Whale Sharks in peace, they could live to between 100 and 150 years old.

There has been a noticeable lack of Whale Shark sightings in the Tunku Abdul Rahman Park in the 2010 season, but as they are thought to have 2 year migratory patterns, big things are expected for 2011.

Less common than the White Tip, the Zebra Shark is still quite often sighted by divers on coral reefs.

Growing up to 3.5m in length, Zebra Sharks are born with stripes, hence the name.

However, they later develop a spot like pattern on the upper body surface.

They are mainly nocturnal hunters, feeding on crustaceans, shell fish and small fish.

Zebra Sharks are found in the tropical West Pacific and Indian Ocean at depths ranging between 5m and 75m.

They feed on mainly invertebrates and crustaceans.

This image here shows these bands fading, which would indicate the animal is reaching adulthood.

Interestingly, its said that this species can survive in excess of 10 hours out of water.

Bamboo Sharks are distributed throughout the Indo Pacific.

They also occur from the east coast of the Indian Ocean to northern Australia, Japan and eastern Philippines at depths ranging from 0m to 85m.

They prefer coastal reef habitats from the shallows to 60m depths.

This species spends most of the day resting in caves or under overhangs and feeds at night.

They are viviparpous (give birth to live young) in litters of 1-5 after a 5 month pregnancy.

They are distributed through the Red Sea, Indian Ocean and Central Pacific.

Grey Reef Sharks are known to demonstrate assertive territorial behaviour and therefore must be notably respected.

They will usually warn off whatever they see as a threat by arching their backs and pointing their pectoral fins downwards.

Grey Reef Sharks are found on outer reefs at depths of 15m to 250m and sometimes are observed schooling in numbers.

They grow up to 2.5m and are a robust looking shark with a much larger girth than the White Tip Shark.

Notice the darker shading that edges their caudal and pectoral fins.

The reproduction for Grey Reef Sharks are viviparous with 1-6 pups in a littler after a 12 month gestation period.

Grey Reef Sharks reach maturity at approx 7 years of age and live for about 25 years.

They can be active during the day and night, usually preferring to hunt at night.

Grey Reef Sharks have to continue swimming in order to breath.