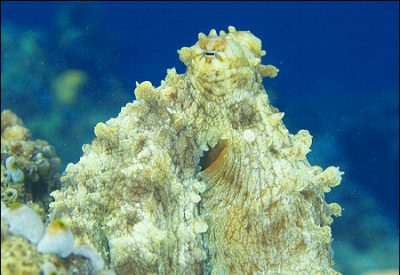 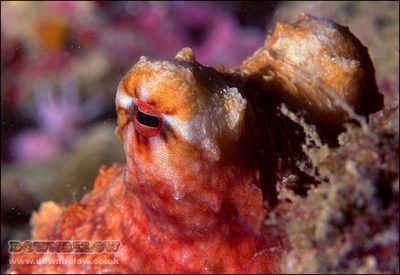 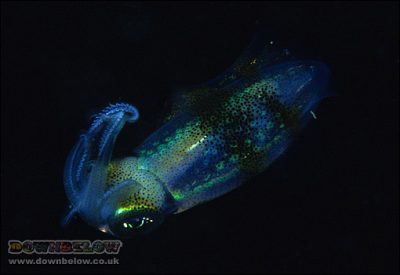 The Cephalopod, meaning head foot, belonging to the phylum Mollusc is characterized by a prominent head and modified mollusc foot in the form of arms or tentacles. The class contains two sub classes, Coleoidea in which species have either no shell or an internal shell; this class includes octopus, squid and cuttlefish. The second class is Nautiloidea where the shell is still in place, Nautilus are grouped here.

Appearing on earth approximately 500 million years ago, today they live in all oceans of the world at all depths. There are approximately 800 living species of Cephalopod and surprisingly little is known about the majority of this species, most do not inhabit coral reefs but live in the deep sea and it would seem none live in fresh water.

They are extremely intelligent and have superb eyesight. Cryptic behaviour is their main defence as few are poisonous. Their soft bodies are unprotected by armour, possessing no tough scales or defensive spines. Some have been known to mimic other poisonous creatures but mostly they blend perfectly into their surroundings, their camouflage is so efficient they have been known to fool each other. Some possess an ink sac for defence, which confuses their predator or prey. These carnivores eat fish, worms, crustaceans, and other molluscs.

They communicate via their skin using cells containing more than one pigment called chromatophores. Many cephalopods have short life spans and reproduce only once. If you can win the trust of a Cephalopod you can have hours of fun playing and stroking them but you must be patient and kind. 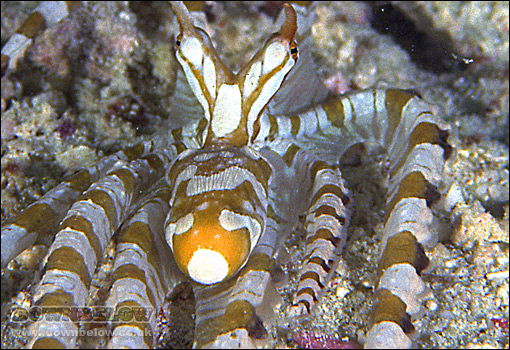 Characterized by their eight arms there are around 300 different octopus species. Octopuses, like squid, have almost entirely soft bodies with no internal shell. The only hard part of their body is the beak. This body design allows them to squeeze into the smallest of spaces, which is very useful when hunting or hiding.

Octopuses live quite short lives between 6 months and 5 years depending on the species. Their main cause of death is sex! Once the male has fertilized the female he will die within a few months and the female will die very soon after the eggs have hatched as she does not eat whilst brooding the eggs.

One method of movement is jet propulsion, used mainly to escape from predators; this is achieved by taking in water to the gills then with the contraction of muscles forcing the water through the hyponome, a muscular funnel or siphon. They do, however, favour walking along the seabed. Octopus can detach a limb in order to distract their attacker and escape. The limb will continue to wriggle gaining the attention of the predator. The severed tentacle will grow back.

Octopus are said to be as intelligent as a domestic cat. In labs they have been observed solving puzzles, displaying long and short term memory and even play. Like most cephalopods they have very good eyesight.

This fascinating little creature is one of the most poisonous species on earth. Its venom contains Maculotoxin, which is deadlier than anything known on land – 10,000 times more potent than cyanide.

Growing to a maximum of 10cm, most are smaller with an average life span of two years. Their common name comes from the bright blue rings that appear when it is alarmed or agitated. They have two poison glands that secrete two types of poison into the saliva; one is effective against crabs (their main food source) the other is more potent and used for defence.

Their bite is so small it would probably not be felt, but if bitten paralysis will set in within minutes, symptoms include, blindness and loss of senses. Death is imminent as there is no anti venom; the only way to survive a bite is through hours of CPR until the poison has passed through the body. Approximately 10 species are known to exist in the waters from Western to Eastern Australia and from Northern Australia through Japan, Philippines, Indonesia through to Sri Lanka. There are possibly many more unknown species.

Recently discovered in the surrounding waters of Kapalai, Sabah, this tiny species is currently undescribed. We have therefore given it a common name. No larger than 1cm in size, we believe this specimen to be a juvenile. It is anticipated that the Two Blue Ring Octopus wouldn’t grow larger than the Hapalochlaena, approximately 10cm.

An appendage between the eyes exists, clearly illustrated left. It has horn-like structures rising to points above the eyes, baring similarities to the Wonderpus. When agitated, two distinct blue rings appeared. Shape and size similarities to the Hapalochlaena are apparent. We have discussed and provided images to marine biologists in Australia, but as yet it remains unidentified. We welcome any information on this species.

Like many small Octopi this species to our knowledge remains undescribed and is quite a rare find. Of all the Octopus we encounter this is perhaps the one that disappears most frequently in front of our eyes due to its extremely cryptic behavior. Moving very slowly and relying on camouflage to mimic its surroundings, it will blend itself into coral rubble to the point where you can no longer see it.

The adults that we’ve observed have been around 15cm in size (including tentacles). Able to change coloration in a split second but having quite distinctive reddish brown bands across the tentacles and covered in branching hairy filaments. It has long tentacles and a cone shaped body. Observed on sandy bottoms, coral reef and coral rubble areas and we assume it to be widespread across Indo Pacific. Every individual that we’ve seen has been at night or during sunset, which leads us to believe they could be nocturnal. 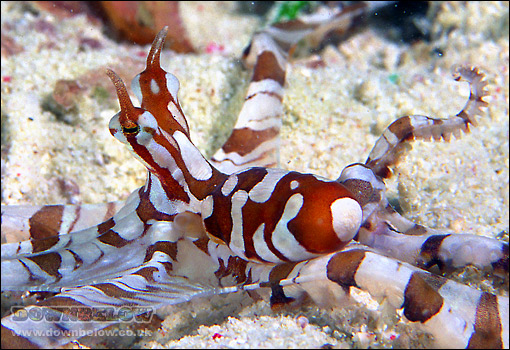 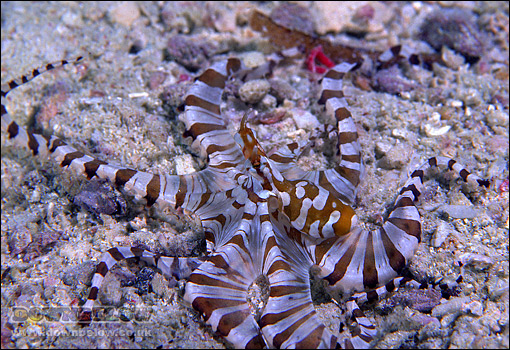 Often confused with the Mimic Octopus, this species appears to be very active during the day particularly morning and evening. Their long arms and umbrella like skin envelopes prey when hunting as seen in the image above. It will readily enter the burrows of other creatures, either to prey on them or take refuge.

Differentiating itself from the mimic, it has greater marking definition. It’s a little rustier red and has creamier white markings. The wonderpuss has taller eye stalks and is less likely to mimic, but certainly does have this ability. They are a rare find and very active, once found they constantly move and hide. 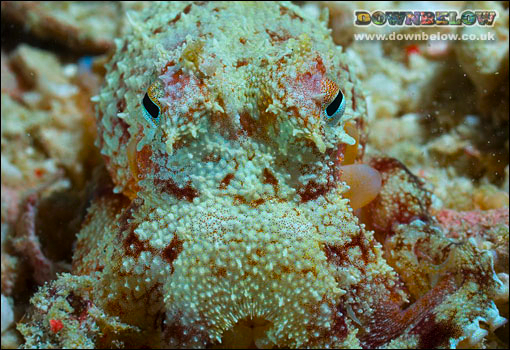 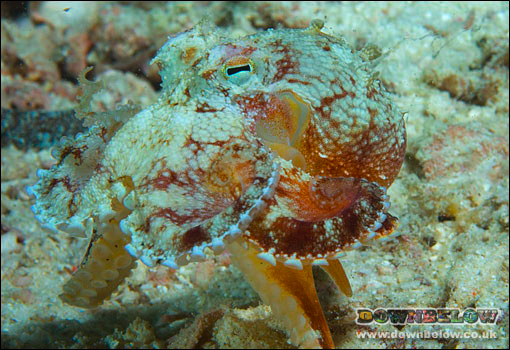 A very attractive little critter, identified by dark vein like markings on body with white suckers on the tentacles. Growing up to 15cm in length, it appears quite dumpy and pygmy like with short legs. Although this species has widespread distribution throughout Indian Ocean and West Pacific, they are not commonly seen.

Our creature was discovered during the day on the sandy, rubble bottom around Kapalai. If disturbed tends to gracefully “walk” over the substrate until it finds an appropriate hiding place. Typically very well camouflaged and hiding among the coral rubble.

A relatively large species, the Common Day Octopous is active during daylight hours and commonly seen on Indo Pacific reefs. They have exceptional camouflage capabilities changing colour and skin texture at super fast speeds. The Common Day Octopus is a master of escape and, in spite of being a 30cm span animal, can squeeze into a hole the size of a coin. Their tentacles grow to about 80cm in length with their head reaching 16cm. They have an oval, false eye below their true eye, only visible during certain colour changes.

Squid belonging to the subclass Coleoidea 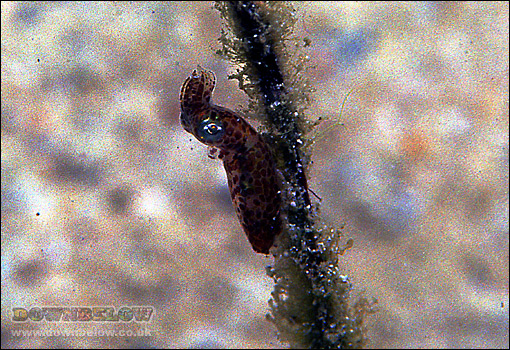 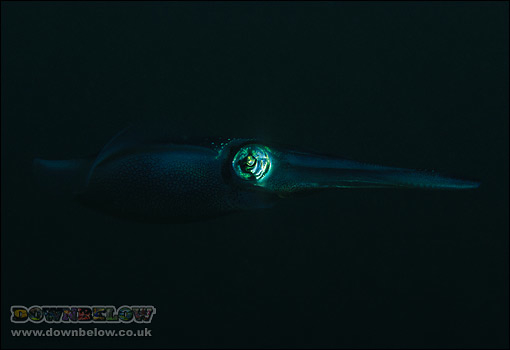 Squids grow very quickly and live for up to one year depending on the species. Giant squid, however, live for up to two years or more. Giant squids have been the source of much folklore and ocean horror films. It is commonly thought that they could possibly grow up to 20m in length. Unlike cuttlefish they are often observed in open water above the reef and close to the surface. Similar to octopus they do not possess a shell. Giant squid are streamlined and have very large eyes.