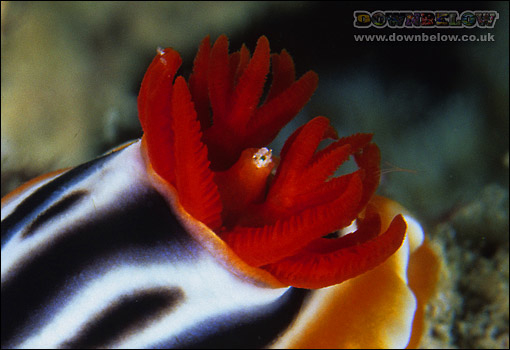 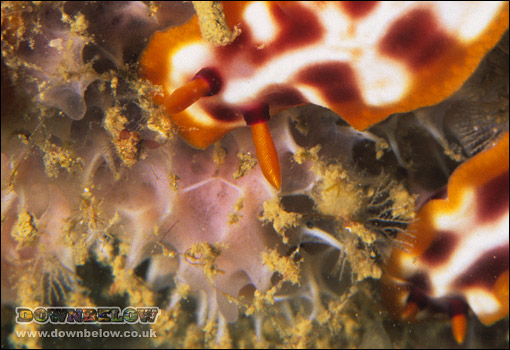 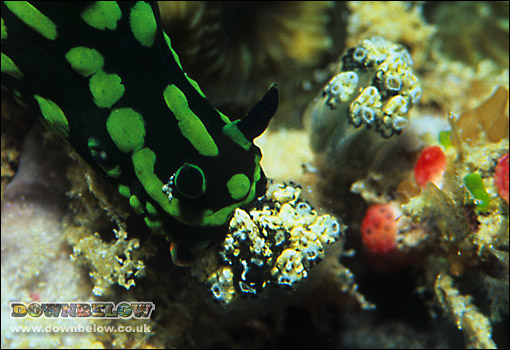 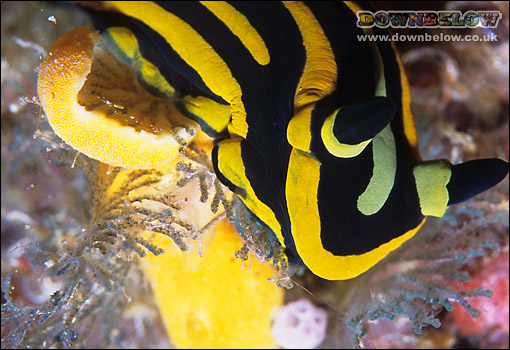 The critters on this page are all of the class Gastropoda Univalves.

The name of this critter is pronounced as nudi + brank, which means naked gill.

Nudibranch are fascinating, colourful lifeforms, which, as the name suggests, mostly have external gills, as they have evolved without shell protection as you can see in the first image on the left.

Found everywhere, except high energy areas such as heavy surf, Nudibranch inhabit all depths through the planet’s oceans, with the largest variety in the Indo Pacific Region.

There are approximately 3,000 described species of Nudibranchs, varying in size 4mm to 600mm.

As they do not have heavy armour for protection, Nudibranch engage in engage in chemical warfare.

Some species secrete toxins if they are distressed, which is so powerful that most marine life that come to within 50cm will be killed.

The source of the toxin is their food, which contain the chemicals required for this toxin production.

Seaslugs as a whole enjoy a varied diet, feeding on corals, bryozoa, ascidians, hydroids and sponges, most of which are packed with zooxanthellae, a single celled algae.

Some seaslugs store and farm Zooxanthellae.

Sometimes referred to as Solar Powered Slugs, they are so efficient a nutrient farming that some never have to eat again.

Nudis are also masters of disguise and often take on the colouration of their food source, such as the corals. They also use colour as a warning against potential diners considering them for a meal, so tell them they are poisonous – be that true or not.

The tentacle stacks often spied on Nudis are Cerata, commonly used for poison storage by some species. Others store poison along the dorsal body wall.

In the second image here, you can see a purpureomaculosa Nudi snacking on a sponge. All that’s left behind is the white, fibre skeleton.

A Nembrotha Nudibranch is feeding on a ascidian in the third image, whilst in the fourth image a Roboastra is feeding on a bryozoan. All nudis are carnivores and some are even cannibals.

Running the length of their bodies is a fleshy foot that produces a slimy mucus, which is sort of like a lubricated road, which together with muscle and hair movement is used for travel.

In the first image on the right, a nudi’s Rhinophore is depicted, which are chemical sensors used for detecting odours of food and other Nudibranchs. Nudis are hermaphroditic; equipped with both male and female reproductive systems, but are rarely able to fertilise themselves.

Their gonad, clearly visible in the second image, is to the right side of the body, close to the head. They mate in a head-to-tail position to join organs as seen in the third image on the right image.

After mating only one of the pair will lay eggs similar in colour to the coral on which they find themselves. This gives a degree of protection to eggs.

Laid in an anti-clockwise spiral, thousands of small eggs give the mass a speckled appearance as seen in the fourth image.

The eggs enter a planktonic stage once hatched, lasting different lengths depending on the species.

Nudibranchs which consume bryozoans and hydroids live relatively short lives of 4 to 5 weeks.

Those that eat sea pens and slow growing sponges live up to 1 year. 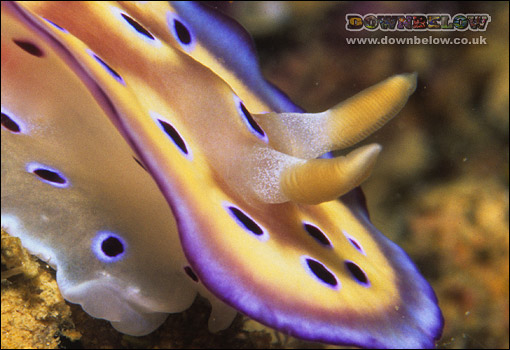 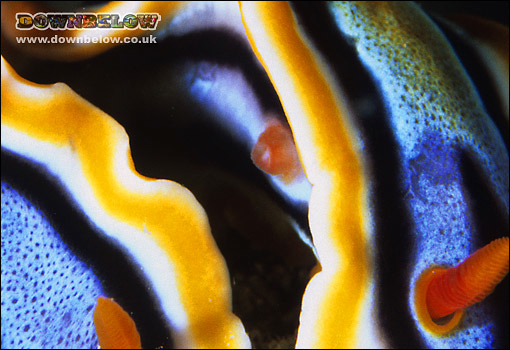 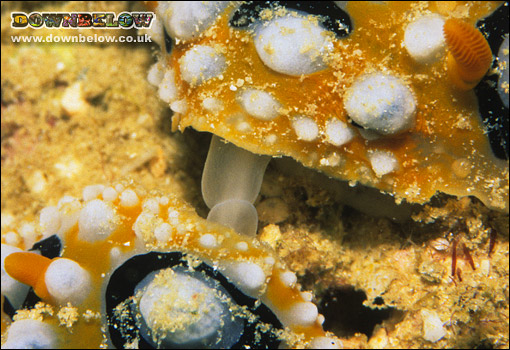 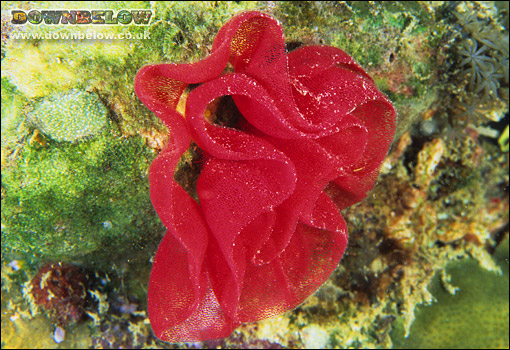 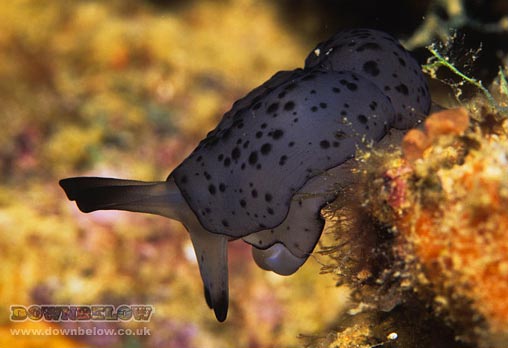 Members of this family vary a great deal in body form.

However they all have gills located between the mantle and foot.

This is usually on the right side of the body – hence the name Sidegill Slugs.

They are grazing carnivores living mostly in shallow coastal oceans and seas.

Documented in Sipadan with different species found throughout the Indo Pacific.

But very little is known about this particular species.

Coriocella sp in the image on the left was photographed by us in the Cocos Keeling islands.

Similar to Nudibranchs, they too have evolved without a shell, or, when present in some species, it’s buried in the fleshy mantle wall.

They are also experts in defense chemical warfare. 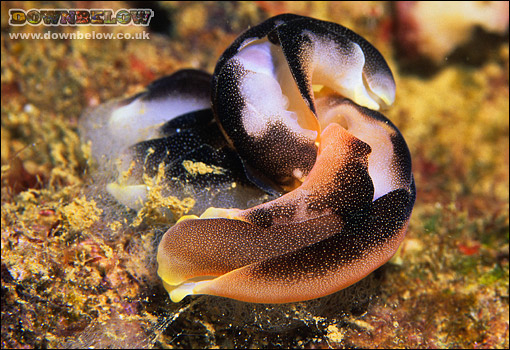 As the name suggests, Headshield Slugs have a well developed shield around the head, offering protection as they plough under the sand’s surface, which is where they live.

They can often be observed during the day on rocks, where they mate,

Also hermaphrodites, Headshield Slugs mate in chains of 3 or more, taking on the role of the male, the female or sometimes both as illustrated in the image on the left. 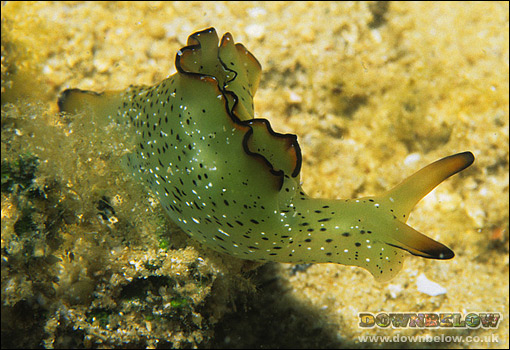 Unlike Nudibranch all but a few Sap Sucking Slugs are herbivorous that feed on algae.

Sap Sucking Slugs are found throughout the world’s oceans and seas, tropical and temperate.

Usually they are well camouflaged, with some blending to the same colour as their food source, whilst others are brightly coloured.