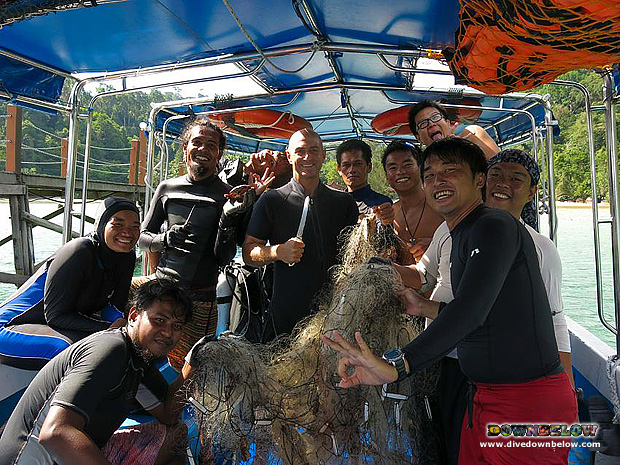 When Downbelow declared war on ghostnets, we weren’t just shouting for attention. We did it because we know the threat is real and true enough, we found another fishing net illegally dumped on one of the most popular reefs in Tunku Abdul Rahman Park. Tragically many marine animals were already trapped dead or dying and the reef was smothered when we encountered it.

Managing Director and PADI Platinum Course Director Richard Swann quickly called upon his reliable crew and trainees to make a team of 11 strong divers. They set to work after a quick briefing and working as a team, the job was completed and the threat removed.

We are happy to report that many live creatures were released from the ghostnet’s death grip.

Ever since Downbelow setup our dive centre within the park we have been active in removing any net that we find, doing so at our own cost. To date we have removed more than a hundred illegally dumped nets within the park. We also act when any nets are sighted by other divers who are unable to remove the net themselves.

These nets were used by fishermen close to the reefs as the yield is higher however once the net is snagged on the fragile reef structure they are left with no choice but to drop it to become an underwater disaster.

The damage caused by ghostnets is probably the biggest threat to the marine park and we are doing everything we can to help the voiceless – the marine animals.

So a big thanks to our team who work so hard on these tricky net removals, not only on this particular one but on all of our net removals so far.