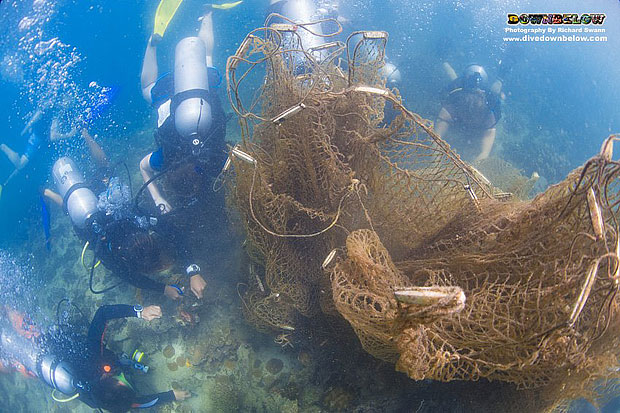 The Downbelow team, who is ever so passionate about conservation and keeping the environment safe, found another ghostnet caught in the reefs within the protected Tunku Abdul Rahman Park, Borneo.

This time they were assisted by students from Cardiff Univesity, who are here to learn the skills on performing underwater research which they will need later on in their careers which includes fine tuning their diving skills.

Many of them probably wouldn’t have predicted that they will be involved in this impromptu conservation act of removing illegally dumped fishing nets.

Any ghostnet found anywhere in the ocean needs to be removed as soon as possible as it is capable of trapping marine animals with small creatures becoming bait for the larger ones. This cycle continues as long as the net is allowed to remain in the water.

Together with the experienced Downbelow team, all of them managed to remove the threat. Now the students can claim of having the experience of removing ghostnets and also learned the techniques of removing them safely. This is something that they can do and advocate when they become marine scientists and researchers in the future.

We would like to say a big thank you to the students for the assistance and we hope the message & act of conservation will inspire them to love and protect our beautiful ocean!