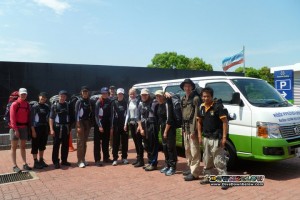 Crocker Range Mountains, Sabah: We expected tears, perhaps even a little drama, but certainly some complaining, yet the Danish Adventure group aced the 5 days of jungle trekking the Salt Trails with nothing but smiles.

The Salt Trails, which spans approximately 35km over the peaks and valleys of the Crocker Range Mountains is no walk in the park.

Add the 5km walking from the sealed road up to the starting point at the Sabah Parks Station in Inobong, and you’ve got yourself 40 tough kilometers.

Our intrepid group of 10 Danish adventurers were upbeat after their detailed briefing the day before, save for perhaps a frown here and there about the possibility of leeches.

“On the 5th day,” predicted Jaco from Downbelow’s office who accompanied the group, “you will be rolling and flicking leeches like jungle natives.”

The first day involved a walk up to the starting point. 5km of what was supposed to be a relatively easy walk, if only it wasn’t the hottest day in Kota Kinabalu so far in 2011.

The sun made the uphills feel so much worse, and the Danes, used to climates many times cooler, turned a wee bit red. 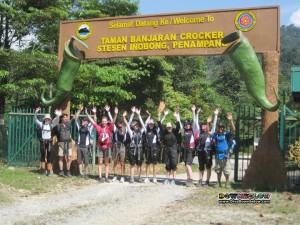 It soon faded when the end-point was sighted and they settled in for the night.

A basic but nutritious dinner was whipped up by Wellson from our dive station who is equally at home in the jungle.

On the second day the actual Salt Trail started and took them up to the first peak at around 800m.

It was steep, but the Danish adventure group maintained a quick pace and covered lots of ground.

The first village was sighted after a mere 7 hours and the group arrived well before dark.

Dinner was greedily gobbled up and while the most tired of the group retired early, the more energetic ones stayed up to enjoy some local rice wine and a bit of a singalong with the host family.

Day 3 started early as the day would consist of 2 sections with slightly more KMs to cover than the previous day. 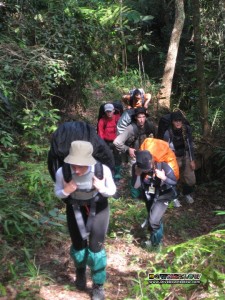 Although the group didn’t have the most comfortable sleep ever, their energy levels remained high and smiles dominated the expressions of the explorers.

They took the hills soon after breakfast and sorting out a packed lunch, and settled into a comfortable rhythm.

Many river crossings had to be done on this day, the first few of which were by way of hanging bridge, regularly used by the local villagers to get to and from school and the ‘office’, which in the jungle is usually a patch of farmland.

Eventually the first river that required a getting wet was reached, and after a bit of hesitation the group waded through and made peace with their wet feet.

Several more rivers followed, 1 of which was quite wide, the remainder being relatively smaller ones.

The group would later say the river crossings were the most fun part of the trip as it required plenty of balance, lots of concentration and a good dose of fun.

They stayed over in an abandoned church that night, with dinner consisting of freshly caught fish, jungle veggies and wild rice.

Tired, but happy, the group retired for the night.

Day 4 was promised to feature the greenest and most dense jungle of the trip. 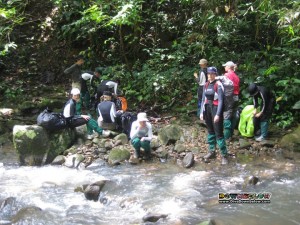 True enough, less than 20 minutes into the walk the first river crossing was encountered, on the other side of which was lush, virgin rainforest with canopy so thick it drained out the light.

The rest of the morning was spent weaving in and out of the dense jungle and crossing several rivers varying in width and depth.

Eventually The Rise was reached. The rise is a relentless uphill that starts at around 300m above sea level next to a river, and rises to over 1,300m. The group was warned, given a moment to mentally prepare and start off again.

Over the next almost 2.5 hours the pace slowed considerably, and just when it looked as if they were about the give up, the Danish adventure group reached the summit of the highest peak on the Salt Trail for a well deserved break.

Next they faced an equal, but inverted challenge; The Fall. What goes up, must come down, they say, and so it is on the Salt Trail too.

The next 2 hours were spent on a steep downhill slope, made worse by a bit of rain and wetness of the forest. Slipping, sliding and occasionally even walking normally, the group zipped down the hill to reach the flats at the bottom of the The Fall. 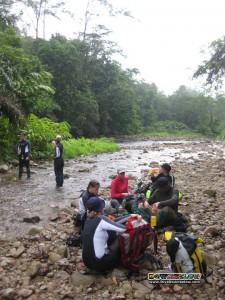 The last 1.5km of the trail towards the Sabah Parks station near Tambunan went swiftly, and as we crossed the last river into the camp, the group all had extreme smiles on their faces.

A welcome hot dinner was soon served, and with everyone shower fresh and sparkly clean, they made their beds for the night and were all soon fast asleep.

Day 5 really was just to get out of the jungle, yet a 2 hour hike still awaited.  It was a bright and sunny day, which made the jungle all the more greener.  The river we had to zigzag across was beautiful, and everybody’s spirits were high.

With a skip and a hop and even some spontaneous song, the Danish adventure group soon reached the boundary of the park, the forest and eventually civilization.

At a nearby village the Downbelow vans greeted them to whisk them back to Kota Kinabalu, a warm shower and a soft bed.

Jungle hardened, conquerors of the Salt Trail and perhaps having set new boundaries for themselves, the Danish adventure group will now take on the ultimate peak; Mt. Kinabalu.

But that’s another story….