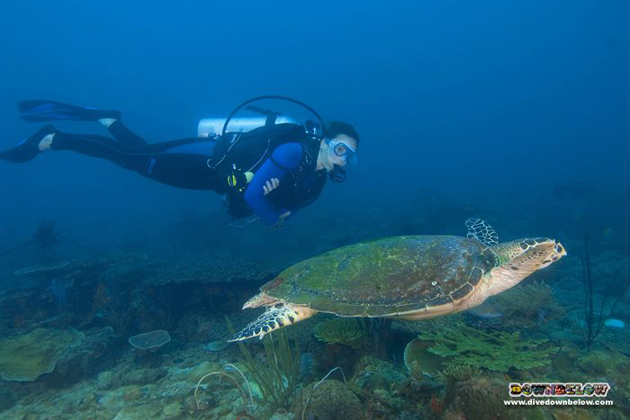 Amidst the unpredictable weather we’ve been experiencing in Kota Kinabalu over the last couple of weeks, the underwater world remains calm and spectacular.

But it’s been so busy at Downbelow’s Dive Centre recently, that it’s been a while since Richard and Joanne have gone on a dive together.

Well, that was remedied this weekend, when the two departed from Sutera Harbour Resort for some quality scuba diving in the Tunku Abdul Rahman Park.

Richard and Joanne headed to the very special Adik Reef for some diving and, armed with his camera, Richard was hoping for a few great photos too.

Wouldn’t you know it, they had the luck of the Swanns on their side and encountered 2 turtles willing to pose for photos.

Everyone was laid back, most of all the turtles, so Richard got a few nice shots of Joanne modeling with said turtles.

The coral reefs in the TAR Park were also looking particularly vibrant, and Richard snapped a few shots of that as well.

“Who needs Sipadan,” ponders Richard, “when you have such treasures right here Kota Kinabalu’s TAR Park?”

Indeed. So, come diving with Downbelow, in spite of the weather, we still dive every day, and it’s beautiful!