We Team Up with Hyatt Regency Kinabalu to Talk Trash

We Team Up with Hyatt Regency Kinabalu to Talk Trash 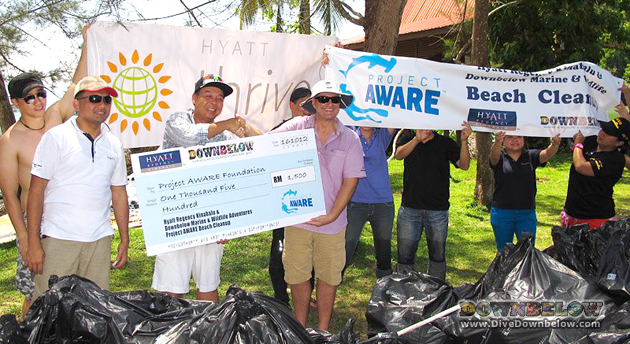 We teamed up with Hyatt Regency Kinabalu yesterday to talk trash. The floating variety, also referred to as marine debris, which is the bane of our existence here on beautiful Gaya island in Kota Kinabalu, Sabah.

The 23-strong contingent from Hyatt arrived at our PADI 5 Star IDC Dive Centre, raring to start the Project AWARE beach cleanup we were about to tackle together to further marine conservation.

Resident PADI Course Director and Downbelow MD Richard Swann first briefed the troops. He gave an overview of the problem of marine debris and its origin, specifically here in Kota Kinabalu.

“What people do on land,” explained Richard, “affects the TAR Park”. Many of Kota Kinabalu’s residents do not realise that when they irresponsibly discard rubbish on the mainland, it eventually gets washed to sea and lodges on our reefs, beaches and mangrove forests.

Richard also shared a few tips on how to help the environment, such a reducing your plastic use, recycling what you can and disposing, in a proper manner, of that which cannot recycle.

Motivated for the collection challenge ahead, the volunteers, including Downbelow’s staff, Hyatt Regency Kinabalu, Sabah Parks, a few of our Go Pro interns and even a couple of Danish adventurers, set off along the beach.

We were inspired to see Hyatt Regency Kinabalu’s General Manager, Mr. Arifin Darmawan, lead the charge as he literally jumped in feet first and started picking clean the beach and mangrove roots.

The rest of the day was spent, in beautiful weather we have to say, cleaning the beach, shallows and tree roots.

By the time lunch rolled around, the group of volunteers had worked up a sizable appetite, not to mention an equally large collection of rubbish, 99% of which were plastic.

“After it gets washed into storm-water drains,” Richard said, “the rubbish ends up in the ocean where wind and tide eventually brings it to our beaches.” Downbelow’s Gaya island dive centre is about 3km from Kota Kinabalu’s mainland.

Having enjoyed a scrumptious, fresh lunch prepared by the Downbelow crew, the volunteer group held the closing ceremony, during which Downbelow and Hyatt together presented a donation of RM 1,500 to Project AWARE, symbolised by a huge, mock cheque.

Richard handed out a Certificate of Appreciation to each and every participant to thank them for their participation and wishing them well on their quest to reduce, reuse and recycle.