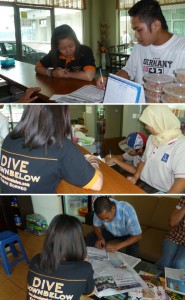 The emphasis of World Ocean Day this year was to inspire the youth, to reach out to them and make them aware of the conservation of our oceans.

As divers Downbelow got involved with World Oceans Day through PADI Project AWARE’s Give Sharks A Chance petition.

World Ocean Day was the target date by which PADI Project AWARE had wanted to collect 100,000 signatures for the plight of sharks, with which to grab the attention of the world’s policy makers.

The enjoyment of the ocean, here at Downbelow, is our life and our livelihood. We actively participate in conservations efforts to preserve it, not just for business’, but also for the continued existence of the ocean’s splendour and enjoyment by future generations.

Give a Shark a Chance

To that effect we eagerly joined the Project AWARE Give Sharks A Change campaign to spread the word about the peril sharks currently face.

As the date drew nearer our efforts snowballed. So eager were Downbelow’s office crew that last week they took to
the square of our office complex, KK Times Square here in Kota Kinabalu, Sabah to convince people face-to-face of the merits of the shark petition.

They collected 65 signatures on that day alone, a welcomed contribution to sheets of signatures we
had already collected and online submissions we had inspired.

As a special subsection of humanity that gets to live and breathe underwater, it’s the duty of SCUBA divers to
share the beauty and splendour that we encounter underwater with those who do or can not.

We hope that together with Project AWARE’s Give Sharks A Chance petition, our continuing conservations
efforts can make a difference to the world’s sharks and the oceans they live in.