The Salt Trail in Sabah’s Crocker Range Mountains is a jungle trekking route that was traditionally followed by village traders.

At regular intervals they journeyed to the tamu, or markets, of towns on Sabah’s west cost to barter with their fresh produce for notably salt, as well as other goods.

Although some of the easier accessible villages are connected by roads, the Salt Trails are still the only access route to some of the more remote villages in the park, particularly those near the upper part of the Papar river and near Tambunan. 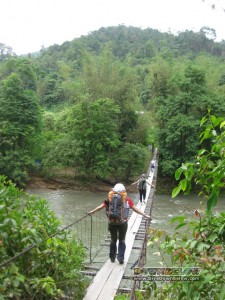 At a steady pace the Salt Trails requires 3 nights in the jungle, making use of the hospitality of villagers or staying in structures with basic facilities along the way.

Officially, the jungle path is said to be 34km long, which consists of some serious jungle trekking across mountain peaks, through muddy river valleys and through some dense Borneo Jungle.

The Salt Trail jungle trekking adventure is ideal for small groups who want to enjoy rugged, Borneo jungle and experience the beauty of nature.

Although a village homestay is part of the itinerary, and you will get a unique glimpse into a slice of village life, the trail is all about nature, which will dominate your days in the jungle.

The Salt Trail jungle trek proper starts at the Sabah Park station at Inobong, perched 427m (1,400ft) above sea level on the western tip of the Crocker Range.

The trail starts with a steep climb, but after Mt. Kebambangan at 727m (2385ft) levels off and settles into gentle slopes for most of the remainder of walk to Kampung Terian. 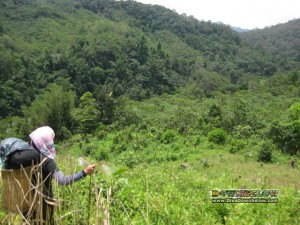 Mt. Kebambangan’s highest peak is about 801m (2,630ft) above sea level and lies in the southern part of the mountain and is surrounded by thick jungle, which has to be navigated before reaching Kampung Terian.

A couple of river crossings, both by way of suspension bridge, also lies on this path.  The walk is approximately 10km long and should take about 7 hours to trek before spending the night in Kampung Terian.

On the other side of Kampung Terian lies some more uphills before descending into the flatlands on the approach to Kampung Buayan.

The crossing of the Papar river at this stage, wide and potential raging if it rains, is still by way of suspension bridge.

Between Kampung Buayan and Kampung Kionop, however, there are no bridges for the multiple crossings.

The crossing can be quite challenging, especially when the river is swollen due to recent rains. 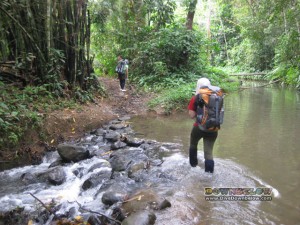 From Kampung Terian to Kampung Kionop is about 10km with an expected trekking time of around 7 hours.

The day starts of with 2 hours of reasonably flat trial from Kampung Kionop, along the Ponobukon river.

After a final river crossing on this side of the mountain, there’s a rest hut, which is at the base of a steep ridge separating the west coast from the interior. The trail ascends this ridge, making for a slow walk over the next hour or so.

Once the top of the ridge is reached, the path evens out again, until the Melungung side where steep downhills await.  The surrounding vegetation here is lush, with large dipterocarp trees lining the path.

It said that on very rare occasions, the very lucky trekker could still spot orang utan in the wild.

Approaching the Melungung stop there are a few more river crossings and eventually the muddy path leads to the Sabah Parks ranger station.

The trail is approximately 11km long and a 7 hour walk is to be expected.

From the Sabah parks station to Kampung Tikolod is a short hike that will take less than 2 hours to complete.

The path starts off with a few small river crossings and then following the path along the river.  Along the way you will pass through small farm holdings where villagers grow everything from Sabah veggie and pineapples, to ginger and pumpkin.

Eventually the jungle path peters out into an unsealed road, severely eroded by rains and thus unusable by all by the most rugged 4x4s. This eventually leads to a sealed road, which passed by Kampung Tikolod and the end of the Salt Trail jungle trek.

If you or your group are interested in doing the Salt Trail jungle trekking across the Crocker Range mountains in Sabah, contact Downbelow or email us directly and we will work out a custom quote for you.