The Usukan Bay Wrecks is a grouping of 3 Japanese ships that were sunk by an American submarine on the night of 1 October 1944, during World War II.

The submarine, USS Hammerhead SS-364, launched on 24 October 1943 in Lake Michigan, had left Fremantle, Australia on her second war patrol on 9 September 1944 and headed to Java and beyond into the South China Sea. 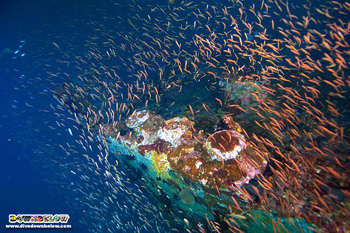 In the meantime a fleet of Japanese cargo & warships were sailing north along the west-coast of Sabah.

The cargo ships were accompanied by an armed escort of naval ships.

According to the most commonly read reports, the submarine made contact with the fleet along Sabah’s west coast in the early everning of 1 October 1944.

Here’s an excerpt from the war report submitted by the Hammerhead’s Commanding Officer, Commander J.C. Martin:

0540 Submerged patrolling just north of Sunken Barrier Shoals. I had figured out from best information available on shipping movements of West Borneo Coast, that my best chance to intercept ships would be to sneak inside Barrier Reefs in the vicinity of Mantanani Islands during the night and then get out in the open before daylight. Although the water was 110 ft. deep with 15 – 30 ft. spots to avoid, I felt that it was too risky and I might catch the Japs off guard.  I wish there weren’t such bright moonlight nights lately.

1908 Surfaced and, drawing in our belts a notch or two and taking a deep breath, we headed through the reefs between South Furious Shoals and St. Josephs Rock to get inside and patrol in vicinity off Usukan Bay. One thing was in our favor, it began to rain and visibility was about 7,000 yards.  Planned to arrive off probable shipping lane route at 2230. 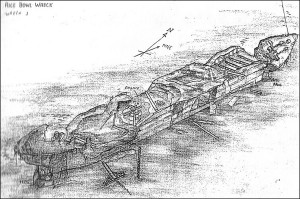 2255 Definitely determined to be a convoy consisting of 5 large ships and 3 escorts 12,000 yds. At this time we were ahead of convoy, slightly on his starboard bow about 1,500 yds of his track.

2308 Commenced opening track to 4,800 yds. to come in on his beam. As we heard pinging and water was fairly smooth we used low speed of 7-8 knots during the whole approach. By this time had determined him to be a base course of 020°. He appeared to be making irregular zigs, 15° either side of the base course, speed 7,5 knots.

2323 With angle on bow of 60° port on leading ship and range of 5,500 yds. put my bow toward him and commenced heading in to shoot on a 90° track between 3-4,000 yds. At this time escorts were plainly visible and were determined to be on port bow, starboard beam and rear of convoy. What the fellow on the starboard beam was doing there I don’t know. The leading escort looked like a DE, the other 2 looked like PC and PGE type. At about 6,000 yds. radar interference was noticed on SJ from DE for about 1 minute, but otherwise there was no indication he was using radar.

The convoy was lined up in almost a column formation and consisted of 3 large AKs about 450 ft. long, 1 medium AK about 444ft. [attack data says 400ft] long and a medium AO about 400 ft. long in that order.

I decided to fire 3 at the leading AK, 3 at the third large AK and then shoot 2 aft at the medium AK and 2 aft at the AO.  I also liked the time of the attack as it would be just about time to relieve the watch and confusion would be more apt to take charge. 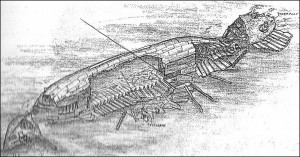 2329 The first two torpedoes hit on time and all bridge personnel saw a huge flame shoot up as the leading AK blew up.

2330 A very bright orange explosion on the 3rd AK was seen by all bridge personnel with accompanying large flashes as the 4th torpedo made a timed hit and the no. 3 large AK blew up.  By now nothing was visible of the first ship although the 2nd in column was still afloat so guess both torpedoes hit the first ship.  Commenced shooting aft with a nicely checking solution of 10° R. gyro, range of 3800 yds. and 95° track angle.

2336 Large column of heavy white smoke was billowing a couple of hundred feet in the air from the medium AK and AO and we must have hit them in the engine space. Was a little disappointed that the AO wasn’t making as much fireworks as the 2 large AKs we hit, as he was heavily loaded.

2337 By this time nothing was visible of the 2 AKs hit by the bow tubes although the 3rd large AK was still plainly visible and there was no doubt that we could qualify both ships in the submarine class with a 6 minute dive. 2 Down.

2338 The medium AK and AO were no longer visible and the white smoke stopped although we could see the trailing escort which had been in the immediate vicinity. Visibility was getting better now and the rain was almost stopped.

2339 At this time radar operator and executive officer in conning tower definitely determined that only the second AK and the 3 escorts were making a pip [on the radar] and these were checked by visual bearings.  Range was 6,500 yds.  As we had picked them up at 15,000 yds. 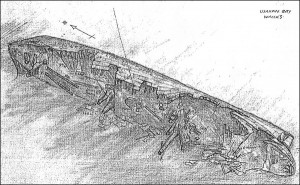 2340 Commenced reload and worked to the southwestward to head around the barrier reefs and come back inside again to intercept the one remaining ship at this estimated 3 o’clock position covering all possible positions between his probably 0100 to 0400 posits.  The escort never chased us and they seemed to very confused, they milled around helter and skelter.

0243 Passed through the reefs with Mantanani Island abeam to starboard 3 miles.  Made a search of the area and unable to find any traces of our Nip friends. I guess the sad-eyed escorts are taking their cargo into a bay or are going back to Jesselton or Brunei with him.

0342 Commenced heading out through reefs to get in deeper water by daylight, at this time we were 9 miles of Agal Point in about 17 fathoms.

0550 Submerged conducting routine patrol in offshore shipping lanes in the midst of floating islands and many logs.

Two weeks later the USS Hammerhead and her crew contacted another fleet, sinking yet more ships.

The Usukan Bay Wrecks are a popular dive site amongst scuba divers who visit Kota Kinabalu, Sabah and, every so often, Downbelow arranges a trip to dive the wrecks. 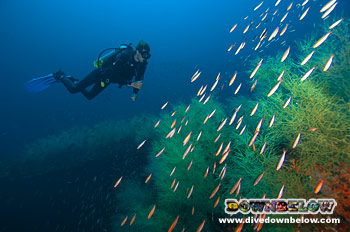 There are now 3 popular wrecks off the coast of Sabah, which were never formally identified due to rainy conditions and poor visibility on the day of the attack.

After many decades submerged in the ocean, we may never know for sure.

The wrecks, are believed to be Japanese warships Hikane Maru, Hiyori Maru and Kokusei Maru.

Locally the World War 2 ship wrecks are known as the Rice Bowl Wreck, the Upside Down Wreck and the Usukan Wreck and lie in water varying in depth from 25m – 40m.

With thriving sea life, both soft and hard corals and plenty of sea creatures, plus the surrounding history, the wrecks make for interesting diving.

It is also fairly certain that the whole story of the Usukan Bay World War 2 Wrecks are not known; who knows what could yet be discovered.

See more of what the wrecks look like now in our Usukan Bay World War 2 Wreck Photo Album.

Contact us and sign up for a a day of diving the Usukan Bay Wrecks in Sabah, Borneo.