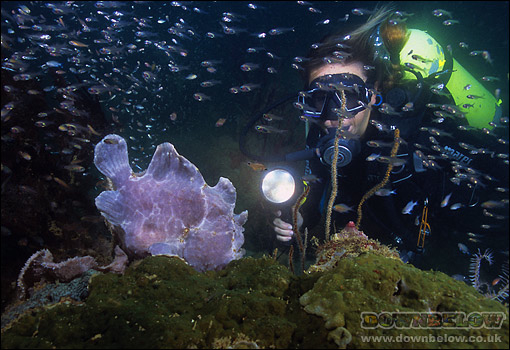 Many divers describe the Anglerfish as the “big ugly one” they saw camouflaged on a coral block, they may not be the most attractive of fish but they certainly hold their own when it comes to fascinating facts.

We will focus our information and images on the family Antennariidae, affectionately known as Frogfish. This marine life occupy the shallower depths of tropical oceans, warm parts of the Red Sea and Pacific, down to 75m. Their deep water cousins however cannot go unmentioned living between 300 and 4,000m, they inhabit the aphotic zone, depths of the ocean not exposed to sunlight.

Shallow water frogfish display cryptic behaviour with body shapes and colours very similar to the coral and sponges they live on. This helps avoid predation and assists when hunting. Adults range in size from 4cm – 38cm and can change colour within minutes or days to match their home environment. The first image shows the contrasts of size of a diver with a Giant Angler, one of the largest of species.

Often residing in the same area or within a few meters of the location for months, sometimes years, divers are able to visit an individual on many occasions.

They are ambush predators with a modified first dorsal spine called an Illicium “fishing rod”. A fleshy lure sits on the end of the appendage. Different species favour different prey so they will mimic the food source of their preferred meal in order to attract that fish.

Notice that the second image on the left shows a lure imitating a small fish. Positioning themselves on reefs, coral heads, jetty pylons and other strategically exposed areas they dangle the lure above their mouth and wiggle it.

Their jaw and stomach bones are thin and extremely flexible enabling them to stretch considerably and consume almost any fish that is not more than twice their size including smaller members of their own family. They have developed arm like pectoral fins, used to walk rather than swim and located just behind these are the gill holes, illustrated in the third image on the left.

Identifying frogfish is often quite difficult because many species have the ability to change colour to suit their environment and sizes vary within the same family. The most important distinguishing factor is their Illicium (Rod) and the lure that sits on the tip.

We tentatively identify our species through lure and fin type, size and coloration however variation exist and there may be slight errors. The first image on the right shows the feather-like lure of the Painted Frogfish, and the second image is the twig like lure of the Marbled Mouther Frogfish.

Little is known of their reproduction, studies of captive species have been somewhat unsuccessful and observation in the wild is difficult. We do know that a mating season exists and the majority of species mate at night. The females puff themselves up indicating to the male that she is ready to mate.

This practice makes her very buoyant and assists her to surface waters. The male follows and when she shoots out the eggs he fertilises them. Rafts of thick jelly are produced to host thousands of tiny eggs, usually the male with attach the raft to himself and guard them until they hatch but in some species the female will care for them. Some attach the eggs and position them so as to attract prey, others hide them in pockets on various body parts.

The third image shows the rear end of a females body becoming more buoyant and bloated with eggs, shortly after photograph was taken we witnessed a male respond to these changes and join her. Unfortunately due to our bottom time limitation we were unable to wait and document them mating.

Juvenile frogfish sometimes mimic distasteful flatworms as illustrated below in the fourth image on the right. Some flatworms contain toxins which are poisonous to other fish so adopting this disguise will hopefully discourage predators. 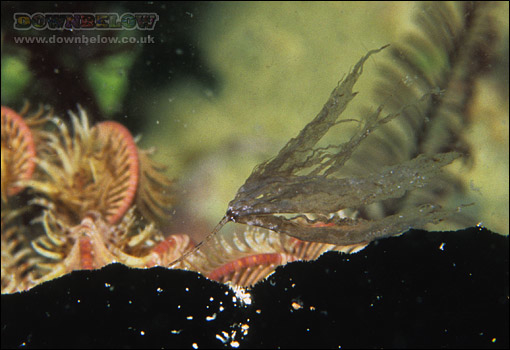 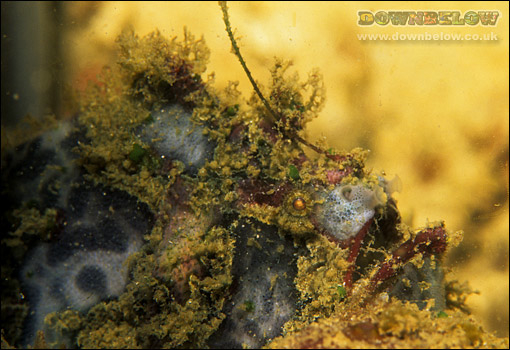 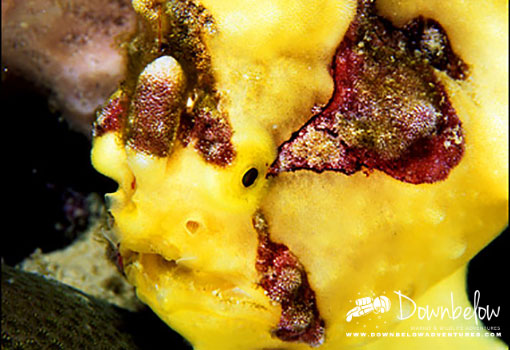