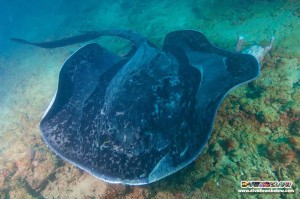 Tunku Abdul Rahman Park, Kota Kinabalu: Resident PADI Course Director Richard and PADI IDC Staff Instructor James have been logging plenty of hours on Adik Reef, and things like this is why…

Off exploring their new playground, Richard and James were a little deeper down where apparently a whole different type of oceanic critter life plays out.

Higher up on Adik Reef it’s a veritable frogfish nursery, lionfish around every third corner and such a colourful variety of nudis it will make macro photographers scream like girls at a Justin Bieber concert.

Lower down on the reef that slopes off into the blue, the rays thrive, and Richard had his camera rig in hand and ever-improving underwater model James by his side.

They shooting small rays who were ever so willing to be photographed.

Richard reports that out of nowhere this huge marble ray appeared and swam right under him, following and turning around under him for a while.

The marble ray’s tail was within whacking distance of Richard, he says, but he was spared while he maneuvering his camera for the perfect shot.

“The pictures don’t do the size justice”, said Richard as he recounted the story later, “he really is a monster.”