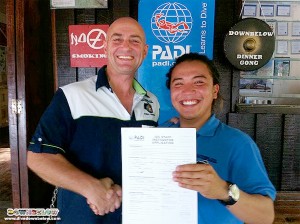 Kyla and Matt were all smiles as their customised January Instructor Development Course wrapped up, marking the end of an intensive 1 month with Downbelow, during which they worked hard to complete both the Divemaster and IDC courses.

Meanwhile, smiling from ear to ear on the other side of the beach house’s front deck were Alvin and Richard.

Alvin – known as Bob on the island – has been with Downbelow for some years and have proven himself a hardworking and ambitious individual.

In conjunction with Kyla and Matt’s January IDC, he took on the PADI IDC Staff Instructor course, which was supervised by resident PADI Course Director and Downbelow MD, Richard Swann.

“I can honestly say,” said a very proud Richard, “that Bob has shown great skill, commitment, determination, character and the makings of a true dive professional of the highest standard.”

“It has been a true pleasure to share knowledge and be involved in Alvin’s training over the last couple of years,” Richard concluded, “and I look forward to many more. Well done, young man!”