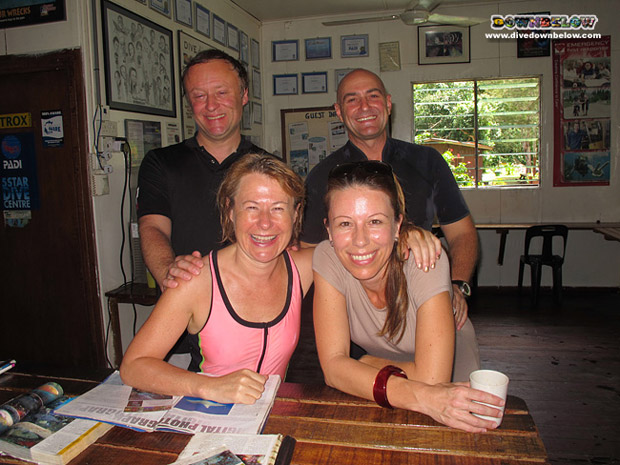 Sometimes you meet people you instantly know you will never forget. Dale Templar and Owen Gay are two such people.

When I met Dale and Owen at our dive centre on Gaya Island over the weekend they felt like old friends almost immediately.

No strangers to this corner of the world, Dale and Owen found themselves in Kota Kinabalu again while the cruise ship Queen Elizabeth, on which Dale is a celebrity speaker, was docked in Sabah’s capital city.

Dale is a journalist, travel writer and BBC producer of notable series such as Human Planet. She’s widely traveled, having been to over 50 countries in the course of her film making.

Owen is a BBC veteran who now heads the Popular Factual division at Icon Films and have worked on a slew of productions that has taken him as far afield as the Galapagos and Papua New Guinea.

I was truly excited that Downbelow was their choice for a Scuba Diving Day Trip during their cruise layover.

Part of the reason they chose us, said Dale, was because of the photography showcased on DiveDownbelow.com, a comment not to be taken lightly coming from two people so accomplished in journalism, film and TV as they are.

During our dive surface intervals, lounging around on the front deck of the beach house, we exchanged life experiences.

Meanwhile, during the dives, our own Instructor Roy lead the dives, pointing out the TAR Park’s impressive population of marine life, in particular nudibranchs, including a rare bubble-shell sea slug.

A highlight of one of the dives was Roy announcing prior to the dive that we were going to find the monkeys. Everyone was suitably confused.

It was cleared up though when, during the dive, Roy pointed out 2 orang utan crabs. Back on the surface excited chatter ensued amongst the divers and Dale exclaimed “we found the monkeys!”.

It was a heartfelt goodbye when we parted ways at our island based dive center before Dale and Owen were transfered back to the port, where the Queen Elizabeth cruise ship lay waiting to whisk them away from this Land Below the Wind.

They may have left Sabah, but something tells me that soon enough, Borneo will once again cross paths with Dale Templar and Owen Gay.