Custard the Frogfish Resurfaces in the TAR Park, Kota Kinabalu

Custard the Frogfish Resurfaces in the TAR Park, Kota Kinabalu 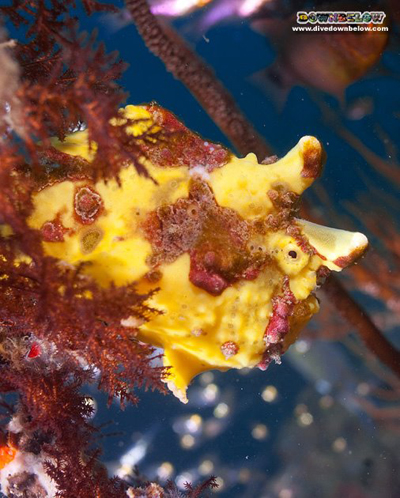 Last year July there was a lot of buzz around a tiny, juvenile frogfish named Custard.

It was found in the TAR Park, not far from our PADI 5 Star IDC Dive Centre, and enjoyed some fame.

Custard was featured in a blog post, a video and even has a Facebook album dedicated to it.

Custard the frogfish was frequently visited by Downbelow’s staff and guests and become somewhat of a celebrity on Adik Reef.

Eventually Custard the frogfish matured and swam the coop and, we hoped, lived on happily in some other nutrient rich nook of the TAR Park.

Well, recently Downbelow’s Alvin was out diving in Ribbon Reef and, deep inside a coral bush, he saw a familiar face.

Wouldn’t you know it, it was our long-lost friend Custard the frogfish.

He popped back to get an updated photo of young Custard, which has been added to its album linked above.

If you want to meet the TAR Park’s young frogfish celeb, contact us and let’s go diving.