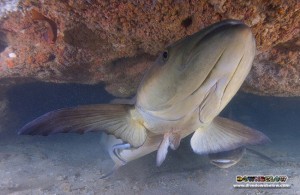 Cobias, sometimes also referred to as black king fish, or black salmon, have feeding habbits that involve hanging around larger animals in the hopes of scavenging leftovers from the animal’s meal.

There is a good chance that the large animals, which this pair is probably following, are the whale sharks reportedly spotted in the TAR Park off Kota Kinabalu last week.

Cobias are fearlessly curious animals, which makes them wonderful photographic subjects, as Richard’s photo illustrates, but the real subject of interest remains illusive.

With the spotting of the whale sharks around the back of Gaya island last week, Downbelow is excited at the prospect of a chance encounter and photo opportunity with the gentle giants.

Follow us on Twitter for instant updates about whale shark sightings in Kota Kinabalu’s TAR Park and check out our Facebook page for images and comments.